I know that I’ve been married for 7 months now and that my bachelorette party was 8 months ago, but I want to finish filling you in on all things wedding related and everything that went into planning for the big day.

So to re-start this series, let’s begin with my BACHELORETTE PARTY!!

I feel like I just have to begin with a little background story…there were supposed to be 10 of us, but about a week before, two of my bridesmaids dropped out. We had booked 3 rooms, but since there were only 8 of us now, I decided to cancel one room as it didn’t really make sense financially.

Before I get too far into this story, I just want to make sure y’all know that I’m not in any way putting down any of my bridal party and I’m sure that every bride goes through some sort of drama of their own. While I had a good time on my bachelorette party, I could have had a better time and things could have worked out a lot differently.

So we get there Friday morning and of course we can’t check-in because it’s like 8am and early check-in starts at 10am. My MOH had everything planned to the absolute T and was having a hard time with the “plan” being thrown off. That kick started the negative attitude of the weekend and it carried on throughout the next two days.

Needless to say, it all ended up in a disaster of girls getting mad at each other and the rest of the weekend not quite going as planned. No one could communicate like adults and I couldn’t understand why it was all happening and girls couldn’t just enjoy MY weekend. I still managed to have a great time thanks to my new cousins and bff, but my MOH and I ended the weekend in a huge fight that had to be resolved before the wedding.

COSMOPOLITAN HOTEL – I’ve actually never stayed here before, but the hotel was soo nice. I normally stay at the MGM (which is also nice), so this was a nice little change. My bff works for Marriott, so she was able to get us an employee discount on the rooms!

EGGSLUT – Located in the Cosmopolitan. This was our first stop Friday morning for breakfast. I got the slut (cage-free coddled egg on top of house-made potato puree, cooked in a glass jar topped with gray salt and chives, served with slices of baguette. Let me tell you, this was DELICIOUS!!

SECRET PIZZA – ok, so there is a hidden secret place in the Cosmopolitan. I honestly can’t tell you exactly where it is except that you have to go down a hallway to get there. It is pretty much open all day/night. They close at 4-5am and open again at 11am.

TACO BELL CANTINA – We hit the TBell Cantina after the club on Friday night (I guess you could say Saturday morning). There was a little bit of a wait, but it was so worth it, it hit the spot after drinking all night. By the time we got here, there were only 6 of us, so we ordered our food and got it to go and ended up eating on the floor of the conference room level of the hotel. Definitely a must hit spot in Vegas!

SCARPETTA – This is where we ate Saturday night after the pool party. I’m going to be honest and say that it was totally not worth it. The portions were small and it just wasn’t a very enjoyable experience. Although, in all fairness, it could have just been because the weekend was so bizarre and by this point everything was super awkward between everyone.

TAO NIGHTCLUB – So being a group of all girls, we knew it wouldn’t be hard to get into a club. Robert’s cousin was able to get us all in to Tao. We still had to pay, but we got to sit at a table and had drink wristbands. We got to stay at the table as long as the club didn’t sell it (since we technically didn’t pay for table service). Our table was located right next to the dance floor which was great! We even ended up dancing on the platforms before deciding to call it a night around 2am.

TAO BEACH – Saturday during the day, we went to a pool party, this particular one is one of the best in Vegas. We used the same promoter with the same rules to get into the pool party. We only had to move couches once, but then luckily we stayed in the same place the rest of the afternoon. It was so much fun (although I don’t think my whole bridal party had fun as a couple of them left pretty early).

All in all, it wasn’t a totally terrible weekend. I mean it definitely could have been WAY better, and I would love to go back and change it if I could, but what’s done is done and unfortunately I’ll never get that experience back again. I have good and bad memories from my bachelorette weekend.

One thought on “Wedding Wednesday – My Bachelorette Party”

Welcome to Not Another LA BLonde! I’m Katie. I live in Los Angeles, CA. I love fashion, fitness, and traveling. I’m so excited to share my life with you on this blog! 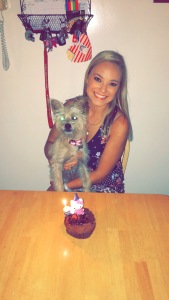 Thank you for visiting my blog!